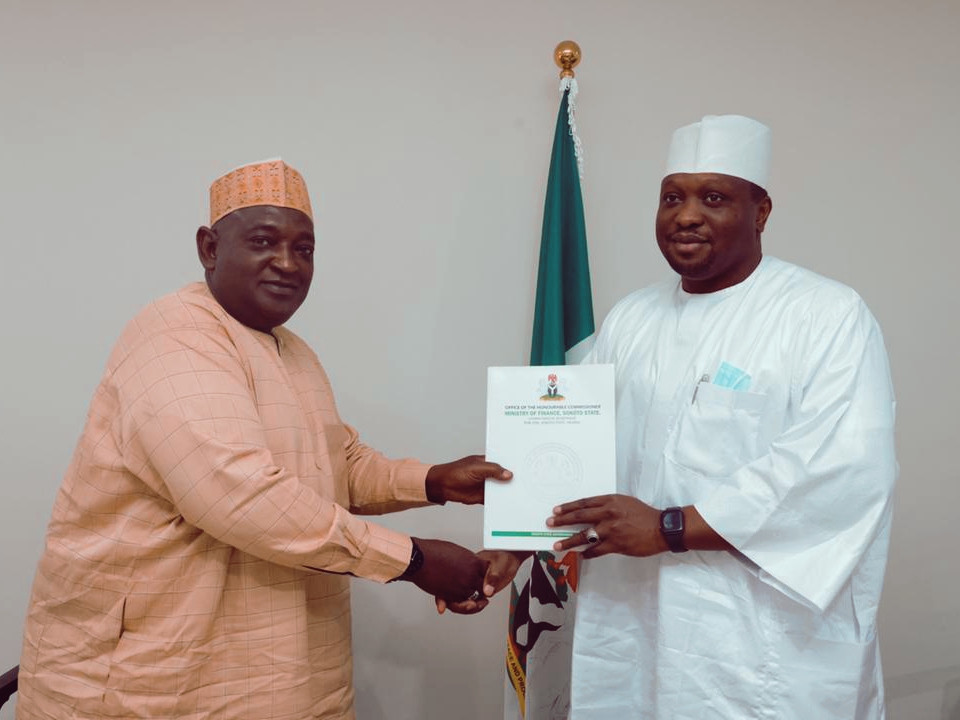 Sokoto State Finance Commissioner, Hon. Abdussamad Dasuki, has formally handed over the Ministry to the Permanent Secretary, Dahiru Balarabe Abbas.
Dasuki, who took over the affairs of the Ministry in 2019, had earlier in March, tendered his resignation in compliance with the Electoral Act.

He recently returned from a foreign trip to formally hand over to the permanent secretary.

Dasuki, who is the Santuraki of Sokoto, said with the prudent management of the resources of the state by the Tambuwal administration, the laudable reforms executed by the finance ministry and the various Legacy projects across the state, Sokoto was better positioned to compete favorably for investments and to meet the aspirations of its people.

The Sokoto prince said he felt fulfilled that he was handing over a reformed ministry that played a key role in the various reforms executed by the Tambuwal administration.

He said with the reforms initiated and executed, the Finance Ministry was adequately prepared to continue to lead the way in the development agenda of the state.

Dasuki recalled that at the inception of the Tambuwal administration, government finances were at the lowest ebb due to low FAAC Inflow, weak Internal Revenue Generation, abandoned and unpaid capital projects, and gratuity liabilities.

“Faced with these challenges, he said, the Tambuwal administration came up with strategies to reform the public finance to ensure prudent management of resources, blocked loopholes in the state payroll and instituted a regime of transparency and accountability in public finance.

Dasuki said those reforms boosted the state’s cash inflow and paved way for the provision of developmental projects across Sokoto.

He said the reforms of the state finances also received recognitions from major institutions, including a grant of $33m in three years and expecting another $22m before the end of 2022 from the World Bank for the commitment to the implementation of the States Fiscal Transparency, Accountability, and Sustainability (SFTAS) programme following its impressive score in the SFTAS ranking so far, placing it among the top three states in the country to achieve such ranking.

Sokoto also emerged first among the 36 states and FCT in the paying taxes column of the Subnational Ease of Doing Business (EoDB) Baseline Survey as announced by the Presidential Enabling Business Environment Council (PEBEC).

He also listed the enactment of the harmonized Consolidated Revenue Law of 2019, which has helped the state to raise its IGR by 97 per cent.

Other achievements of the ministry, according to Dasuki, include: continued automation of revenue processes; establishment of revenue codes for the state and all the 23 local governments; establishment of Single Treasury Account (TSA); Adoption of Cash Management Strategy; Adoption of Monthly Debt Arrears Clearance Framework on Contract and Gratuity payments; Establishment of SFTAS Secretariat; provision of utility vehicles, motor cycles, office furniture, ICT facilities and equipment; and construction of an ultramodern Revenue House and Complex.

Others include harmonizing state civil service database; sanitizing the state civil service salary and pension by linking BVN to personnel management data; provision of adequate manpower and ICT facilities for the salary department; training and retraining of staff for better output and performance; and implementations of N18,000 and subsequently N30,000 minimum wage and CONPCASS salary scale of tertiary institutions for civil servants, thus emerging as the only state in the Northwest that has been consistent with the payment of new minimum wage and with zero salary and pension arrears.
Dasuki also listed the enactment of Fiscal Responsibility Agency Law 2020 and constitution of its board; migration from Cash Basis Accounts to IPSAS Cash and later Accrual Basis ISPAS; and monthly payment of subsistence allowance to both foreign and local students and also cleared arrears of tuition fees.

The former commissioner thanked Governor Tambuwal for the opportunity to serve at the helm of affairs of the finance ministry for three years, adding that he is confident that the achievements recorded by the ministry has placed Sokoto on the front row of states that has reformed their finance sector for optimal performance.

Dasuki is the son of the 18th Sultan of Sokoto, Alh Dr Ibrahim Dasuki, a highly revered Sultan across Africa and the globe.