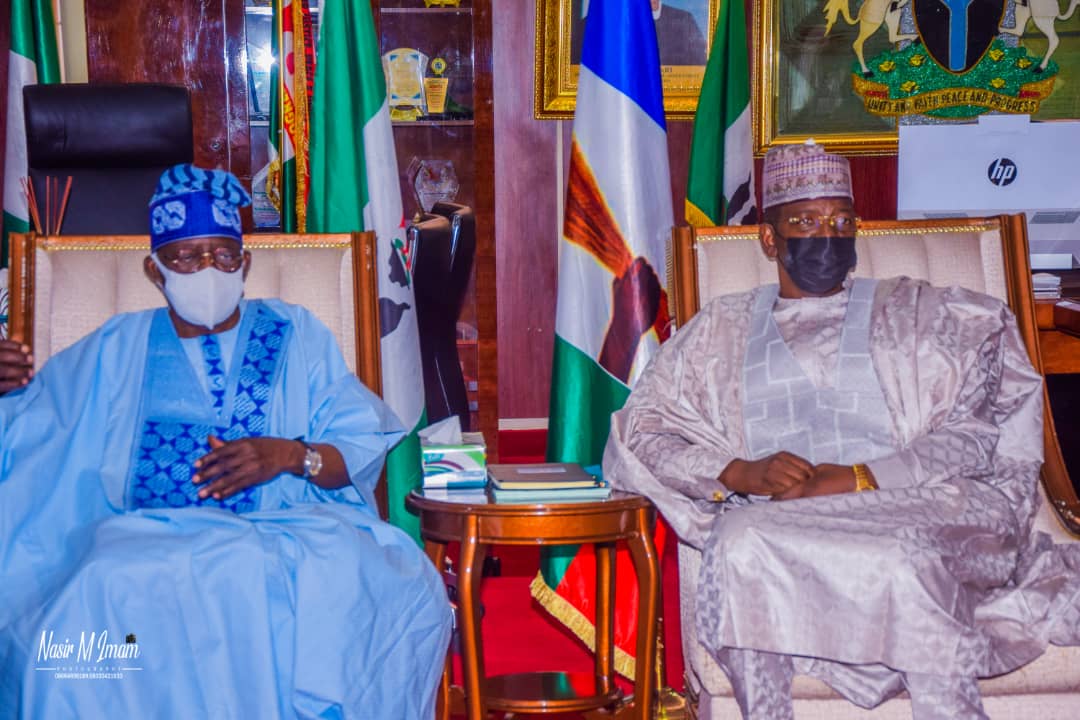 Zamfara state Governor Bello Mohammed has thanked national leader of the All Progressives Congress (APC), Senator Bola Ahmed Tinubu for finding time to visit the state to commiserate with the people over the recent twin bandits attacks which left 58 persons dead in some communities of Anka and Bukkuyum local government areas of the state.

Governor Matawalle, while receiving APC National Leader and his entourage at the Government House, Gusau, described him as “doyen of contemporary Nigerian politics, dedicated leader, and a bridge-builder who has spent the past 23 years of democracy in the nation fostering unity, nurturing and raising individuals who have equally distinguished themselves in various spheres of human endeavour in contemporary Nigeria.”

Governor Matawalle pointed out that, “since the sad incident of attacks in Anka and Bukkuyum local government areas, we’ve been inundated with messages and visitations from all over the country. The sympathy visit by this political colossus, a towering personality and leader in many fields of human endeavour, will further console the bereaved communities and the entire people of the State.

Commenting on the prevailing insecurity in the state, Governor Maradun said the problem of banditry in Zamfara state has persisted for over a decade now, noting that on assuming office in 2019, he made it an utmost priority to address the issue as no meaningful development could be achieved in an atmosphere of insecurity.

Considering the reality that the conflict is tied to ethnic fault lines, the Governor said he initiated a reconciliation programme which leaders of thought overwhelmingly accepted all over the state.

According to him, “as a result of the programme of dialogue and reconciliation, hostilities ceased for a period of over nine months. Also, hundreds of kidnapped persons were unconditionally released by their captors.

“The disarmament process started the glorious era of brotherliness, love, and mutual coexistence among all segments of the community and for the first time in more than a decade, the annual Fulani festival of Sharu was held in Gusau in 2019.

He further explained that the political undertone of the banditry ravaging the state started yielding positive result by his administration in curtailing the menace was however, a bad news for some self-serving politicians.

The Governor lamented that “such self-serving politicians whose stock in trade is inciting violence and sowing discontent in our communities as was evident in their media interviews and remarks at various events. They, therefore, perfected plans to sabotage the peace process. In some cases, security reports have fingered them as having direct involvement in the planning and execution of kidnapping, ostensibly to embarrass the government.”

He further mentioned that the same crop of politicians will always try to paint a gloomy picture of the situation in Zamfara, often by exaggerating the figures of casualty in the event of attacks. For instance, based on the figures confirmed by the affected community leaders when he visited affected communities after the recent attacks, a total of 58 people were officially confirmed by both the security and emirs to have lost their lives in contrast with the outrageous figures being brandished in the media by the opposition who chose to play politics with the lives lost.

Gov Matawalle, however noted that under the dialogue process, the state government have also been committing enormous resources in the provision of logistics and allowances for the security forces.

This include, among others, the procurement and distribution of 200 brand new Hilux pickups for the security forces barely a few months after his swearing-into office in 2019.

Similarly, with the escalation of the situation in recent months, he stated that the government adopted more stringent measures, including the shutting down of telecommunication networks for four months as essentially doing everything within to bring this sad chapter in the history of the state to a close.

The governor also assured that these measures will continue with dedication and stronger vigour until the the state is fully secured.

According to him :” As we get closer to 2023, we will be more vigilant and proactive, knowing that these destabilising forces are not likely to tone down their antics. They may continue to plot nefarious schemes in order to obtain political gains,” he noted.

Gov Matawalle on behalf of the government of Zamfara State, thanked Sen. Tinubu for taking time to visit and commiserate with the State, praying Allah to richly reward him and fulfill his desire for building a strong bond among Nigerians across all the divides.

Earlier in his address, Sen. Bola Ahmed Tinubu said he was in Zamfara state to commiserate with his brother, Governor Matawalle and the entire people of the State, describing the Governor as a bridge-builder, bold, and capable whose leadership acumen to lead in challenging times are unquantifiable, promising to support the Governor and security forces in their efforts to rid the state of the bedeviling insecurity.

While donating 50 million naira to the victims of the recent incident, the APC leader who was accompanied by the former Governor of Borno state, Sen. Kashim Shetima, former Chairman of the Economic and Financial Crimes Commission (EFCC), Malam Nuhu Ribado among others, commended President Muhammadu Buhari on his support and resilience in fighting kidnapping, banditry, and other security threats in the various parts of the country.