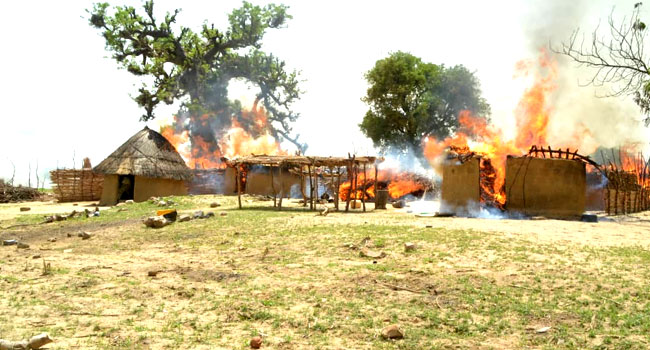 The bandits, who operated for hours, also destroyed shops and carted away foodstuffs and other valuable items, leaving the residents stranded with no food to eat while others fled to neighbouring towns.

Ibrahim, a resident of the town, told Daily Star that the bandits, who were numbered over 200, came from a neighbouring village called ‘Tulutu’ and surrounded Birjingo village around 5pm on Friday and their operation lasted for 2 hours before rainfall forced them to leave.

“They came around 5pm on Friday with over 100 motor bikes each carrying not less than two persons, surrounded the town, destroy[sic] almost all the shops and cart away[sic] foodstuffs and other valuable items. They also searched houses-by-house search and rustled cows in their hundreds.

“They spent 2 hours of operation without hindrance nor response from security agencies. 8 persons were killed in the process and 10 housewives were kidnapped” Ibrahim said.

He added that police were notified but didn’t respond throughout the bandits operation period which lasted for over two hours.

“Initially, few moments to the incident, two vehicles of Mobile Police were seen patrolling the area around Tulutu where the bandits came from, so we suspect they sighted the bandits in their hundreds and retreated because the bandits outnumbered them”, he added.

Ibrahim, however, said earlier in August, bandits launched similar attack in Gidan Tudu village, also a neighbouring village to Birjingo, although no life was lost, but they rustled cows, vandalised shops and carted away foodstuffs and other valuable items.

On Saturday, Sokoto state Commssioner of Youth and Sports, Hon Bashir Gorau, in company of the district head of Cinaka, under whose district is Birjingo, visited the scene and commsirated with the community over their losses and prayed for the Almighty Allah to forgive the deceased.

Ibrahim called on the state government to “empower local vigilantes with adequate equipment to help tackle the insecurity since the number of the security personnel nationwide is not enough to tackle the banditry in the country.”

When contacted, the Police Public Relations Officer Sokoto State, ASP Sanusi, confirmed the incident but said he was yet to be briefed officially, almost 74 hours after the incident, as investigations were still ongoing at the time of filing in this report.