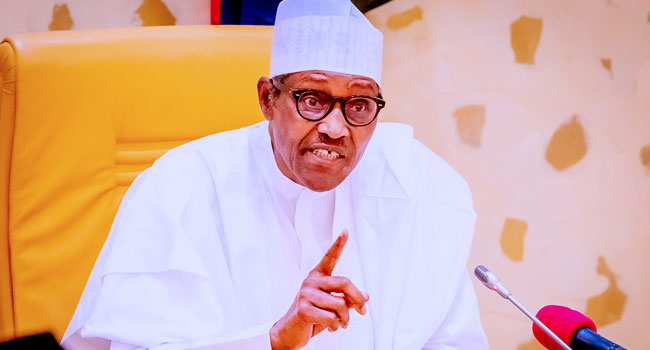 President Muhammadu Buhari has categorically stated that his administration will not be releasing leader of the outlawed Indigenous People of Biafra (IPOB), Nnamdi Kanu.

President Buhari, who disclosed this in an interview with Channels Television on Wednesday, said Kanu should defend himself in court as he would not interfere with the judiciary.

Some Igbo leaders had earlier visited the president at Aso Rock, where they pleaded that the IPOB leader, who is currently standing trial for treason should be freed.

They had asked the president to show mercy and Buhari had promised to see what he could do.

Buhari averred, “There is one institution that I wouldn’t interfere with, that is the judiciary, Kanu’s case is with the judiciary but what I wonder is when Kanu was safely in Europe, abusing this administration and mentioning too many things, I thought he wanted to come and defend himself on the accusations.

“So, we are giving him an opportunity to defend himself in our system, not to be abusing us from Europe as if he was not a Nigerian. Let him come here with us and then criticise us here. Nigerians know that I don’t interfere with the judiciary, let him be listened to, but those who are saying that he should be released, no, we cannot release him.”

Buhari also asked the youths not to think government must give them job after graduating from schools.

When asked what comes to his mind about Nigeria’s young people in his Channels TV interview, he said, “I wish when they go to school, when they work hard, when they earn a degree, they don’t give it thinking that government must give them a job.

“You get educated because an educated person is certainly better than uneducated one even in identifying personal problem. So education is not just meant to hang on to government to give you a job and what the colonialist indoctrinated in us, to have a car, to have a house and to start work at 8 o’clock and close by 2 o’clock. No.”

Asked on the 2023 election, he said it is not his problem, adding that he would not reveal his favourite to succeed him in 2023.