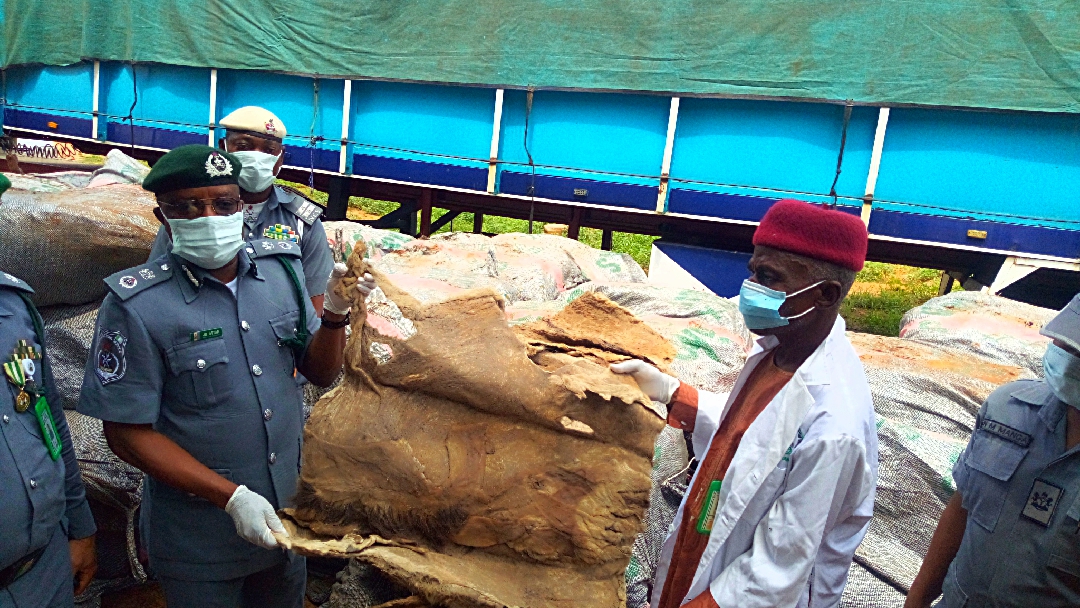 The Command’s Area Controller, Mr Joseph Attah, made this known at the command’s in Binrin Kebbi on Friday while handing over the seized items to officials of the Nigeria Agricultural Quarantine Service (NAQS).

He said,” On June 2, at about 4:am based on credible intelligence about smuggling activities around Bahindi – Dogon Rimi Waterside in Bagudo Local Government Area, the Command’s Rapid Response team quickly rushed to the area.

” Upon approaching the described location, the patrol team sighted a huge covered mound of loads near the river bank. They discovered that the covered mound was sacks of donkey skins carefully arranged, awaiting a boat for onward smuggling out of the country.”

Attah added that the items were evacuated from the location and brought to the headquarters in Birnin Kebbi.

“Physical examination revealed 94 jumbo sacks, each containing 30 pieces making a total of 2,820 donkey skins, with thee valued worth over N48.1 million,” he said.

Attah also explianed that the he donkey skins fall under Schedule 6 of Common External Tariff – 2022 to 2026 exportation of which is prohibited.

“The intent to smuggle it out of the country, therefore, contravenes Section 63(b) of CEMA CAP C. 45, Laws of the Federation of Nigeria, 2004 (as amended).

“This level of poaching resulting in the slaughtering of two thousand eight hundred and twenty 2,820 donkeys is not acceptable. If this is allowed to continue, donkeys will go into extinction.

“Nigeria is a signatory to a multi lateral Convention on International Trade on Endangered Species Flora and Fauna (CITES) which makes trade on donkey skins illegal.

In view of the above, the items were converted to seizure and in line with the directive of the Comptroller- General of Customs, Col. Hameed Ibrahim Ali (rtd.), 94 jumbo sacks of the donkey skins are being handed over to Nigeria Agricultural Quarantine Service, Kebbi State in the spirit of interagency collaboration,” he said.

The controller reiterated the determination of the command to nip smuggling in the bud as long as the general public are willing to support them with useful information about smuggling activities.

Alhaji Idris Dakat, the Deputy Controller- General Quarantine of NAQS, said that the handover of the items was a testimony of the inter- agency synergy between the two agencies.

He said that it was the third time that NCS was handing over consignment of that nature to NAQS for safe disposal.

” It means that a total of 6,832 donkeys slaughtered without replacement,” he said.

The C-G commended the NCS for the synergy and sought for more collaboration with other agencies in the fight against the menace.