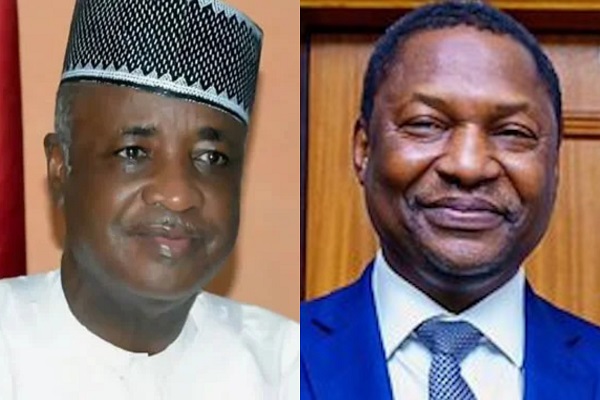 In life, nothing is permanent except change, which is constant. In politics, politicians have their language of wining and dining with one another and this has been one constant aspect of Nigeria’s democracy that is quite unmistakable.

The cliche “there is no permanent friend or enemy in politics” was at play in Sokoto a few days after the Sallah festivities, when the Attorney-General of the Federation and Minister of Justice, Hon. Abubakar Malami ( SAN) paid a surprise visit to the former governor of Sokoto state and a serving Senator, Distinguished Aliyu Magatakarda Wamakko at his Gawon Nama residence in Sokoto.

It was not just a visit but a landmark one that added great value to Wamakko’s political credentials, which have been on the rise since 2007 when he hit the ground running by changing the political climate of Sokoto politics. This is notwithstanding the numerous gang-ups to stop him from being the godfather of Sokoto politics by the then political actors who thought they had it all in their favour.

Ordinarily, Malami’s visit on July 12th, 2022 could have passed for just another politician paying homage once in a while, especially during festive periods but considering how political events before the APC national convention unfolded, the visit to Gawon Nama by the minister was a massive political statement which has proved that politicians are human too.

The minister confessed that Wamakko is a political leader, father and role model for every politician to emulate and be proud of. According to the minister, he was on his way to Abuja from his home state of Kebbi and felt a compelling need to call on his political father, leader and role model in Sokoto, by paying homage especially as it was a festive period. Malami took time to extol the qualities and political acumen of Senator Wamakko who has been a politician with a difference because of his large heart. He described him as a politician like no other in Sokoto — who has been building bridges for decades now. One thing is clear in the points raised by the minister: Wamakko is a strong force in the politics of Sokoto State nay Nigeria. How it all started?

Wamakko’s political journey began way back in the late ’70s but the political Tsunami that brought him to the limelight beginning in 1999 when he was on a joint ticket with Bafarawa as governor and deputy respectively has been expanding from a local Tsunami to a national Hurricane and is becoming like a snowball which has kept on rolling nonstop.

In 2006, before the 2007 general elections which brought Wamakko to power as governor of Sokoto state, a local anthem was composed and it influenced many in joining the bandwagon and before one could say Jack Robinson, SAI ALU and A BAMU A HUTA became household morning prayers and the momentum was unimaginable as the young and the old, women and children all joined in singing that chorus. “A bamu a huta, sai Alu”.

Since then, it has become a unanimous and simultaneous anthem not only in Sokoto but beyond the shores of the Caliphate states. It became the vogue in the democratic space.

Going by the political shenanigans before the APC national convention four months ago, political observers were taken by surprise in hearing or seeing Malami at Wamakko’s residence. But to the discerning observers, that is the beauty of politics, you disagree to agree and vice versa. Malami has shown and proved that he is a politician who learns from his past errors and as a lawyer, he knows politics is dynamic and so one should not keep malice and destroy the bridges one has built in the past. Malami has also exhibited a good spirit of sportsmanship as a young politician who has a lot to learn from his elders and political godfathers like Wamakko.

Again, Malami’s visit to Wamakko has sent a positive signal to those who had wanted to mislead him to destroy his political ties with Wamakko that one doesn’t bite the finger that feeds them.

Furthermore, the visit to Gawon Nama by the minister has exposed those fifth columnists who went to Malami with a bad project and products, especially those losing sleep over the towering influence of this godfather of Sokoto politics. They should bury their faces in shame, for their agenda has collapsed; a clear proof that they are too bad OMBUDSMEN.

They were bad marketers who went to Malami with bad products. They had gone to Malami for a very selfish reason and nearly deceived him into buying their unmarketable products.

But in the end, the minister was smart enough to ditch the moles and Judases who have found their way out of the APC and carried with them their dirty politics. Malami has abandoned the cookies to crumble and so shall it be.

The minister’s Sallah visit to Wamakko in Sokoto is one massive political statement that has been making other political parties in the state jittery as we gradually approach another election year. The APC in Sokoto has been boosted and uplifted with that singular gesture that brought Malami and Wamakko to the public glare.

The key word here is respect from a young minister to the Senator. Malami has exhibited respect for the man who deserves such from him and his contemporaries. It is an eye-opener for those Wamakko single-handedly built politically but are plotting, albeit unsuccessfully, to destroy his political legacies. Like Wamakko once said, “an ageing Lion is still more useful than a young dog”. In the local parlance, he would say Zaki ko ya tsufa ya fi saurayin kare amfani.

Tough times don’t last; tough people do and that is why Wamakko is still standing like the Iroko Tree. Being the tactician he is, he has been ahead in the political game.

No, Mr President, Enough is Enough! – By Prof. Abubakar Sabo