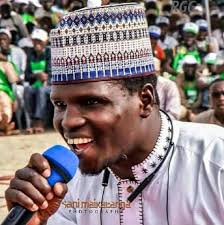 The celebrity APC singer was on Friday attacked by enraged youths in Katsina, the Capital of Katsina state.

Katsina Post reported that some youths stormed the singer at Central Market Katsina as he was shooting a video of his latest song “JAHATA CE”.

The report further indicated that Kannywood actor Ali Nuhu, Producer Bashir Maishadda and Tijjani Asase were in company of Rarara during the mob by the hoodlums.

On sighting the singer while preparing for the video, the aggrieved youths started shouting, condeming the singer, while calling him names saying in hausa “Karya, Bamayi, Bama so miyarsa yake gyarawa ba a kare talaka”.

Although the singer had security men on his team during the incident, the his car was reportedly vandelized by the angry youths.

In the song “JAHATA CE”, the singer expressed dismay over the rising insecurity in the state despite most of the political actors, the president, politicians occupying key positions in the country are the from the state.

It was not confirmed whether or not the singer was injured as a result of the attack.