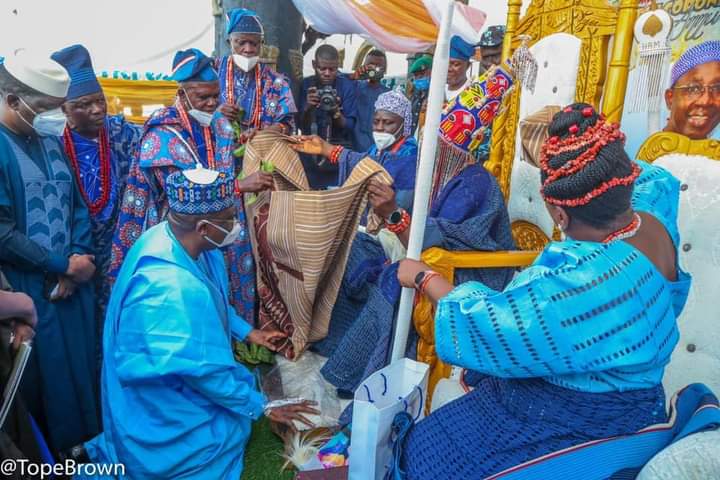 President of the Senate, Ahmad Ibrahim Lawan, was Saturday conferred with the title of Aare Akerewolu of Iyin-Ekiti by the paramount ruler of Iyin-Ekiti, Oba Adebola Adeniyi Ajakaiye in Ekiti state.

The conferment was part of the activities to commemorate the first coronation anniversary of the Oluyin of Iyin.

Lawan thanked the Oluyin of Iyin, his cabinet and the entire people of Iyin Kingdom for finding him worthy of the title of Aare Akorewolu of Iyin Kingdom.

He averred, “I believe that what Kabiyesi did is to recognise someone from Yobe State. An Ahmed from Yobe who is coming to Iyin for the first time but has been with Iyin in his life, in his dreams, in his mind, since I met my friend, my brother, my colleague, Distinguished Senator Michael Opeyemi Bamidele, your son.

“On behalf of myself, my family and people of Yobe North Senatorial District that I represent and the Senate of the Federal Republic of Nigeria and indeed the entire National Assembly, I thank you most sincerely for the honour done to me.”

“I accept this honour on behalf of all of us in the Senate and we have a very good delegation of Senators in this very important first anniversary of the coronation of His Royal Highness”.