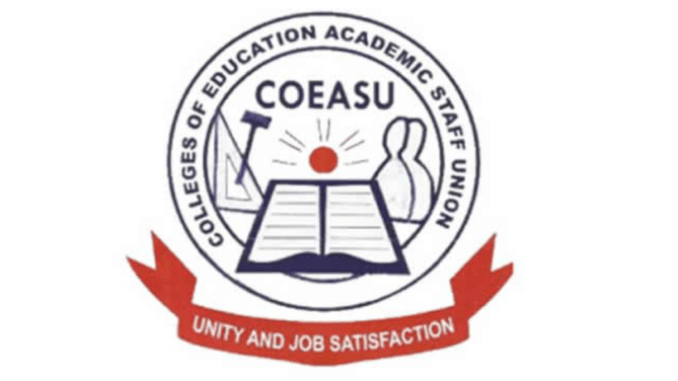 Colleges of Education Academic Staff Union (COEASU) Shehu Shagari College of Education Sokoto chapter has joined the nationwide strike called for by the national body of the union.

The meeting, which was attended by 51 Chapters comprising of 111 delegates
including former Presidents and members of the National Officers’ Council (NOC), resolved that NEC had “received with utter disappointment the continued inaction of Government on lingering issues in spite of the Union’s lengthy perseverance and uncommon disposition towards alternative dispute resolution. It was considered more worrisome that the FG has failed to reciprocate the patience of COEASU which was underpinned by concern for the plight of the students and the system since December 5th 2018, when the last strike action was suspended. After extensive deliberations and dispassionate assessment of the series of engagements of National Officers’
Council with Government officials and critical stakeholders, NOC, while appreciating these efforts and promising disposition of relevant authorities including the Honourable Minister of Education, resolved that only desired results through tangible action by Government would have been enough to prevent industrial action as the Union’s ultimatum lapsed on Monday, 6th June, 2022.”

Specifically,  the union’s NEC condemned what it called the “non resolution” of the following issues:

Meanwhile, in a statement co-signed by the Chairperson and the Secretary of COEASU Shehu Shagari College of Education Sokoto, Ibrahim Adamu Musa and Bashar Muhammad Yabo seen by Daily Star, the Sokoto chapter of the union expressed “profound gratitude and appreciation” to Sokoto State Government for “effort in dealing with the demands of its members as well as the development of education in the state. ”

“As we celebrate a mutual industrial harmony with the state government, the union is also subscriptive to the National Officers’ Council (NOC), National Executive Council (NEC) as well as the Chapter Executive Congress (CEC) and Chapter Congress (CC) hence a resolution was reached as will be seen in the next paragraph.

“Arising from the National Executive Council (NEC) meeting held on Friday 10th June 2022 at Federal College of Education (Technical) Asaba Delta state, NEC resolved to resume the suspended 5th December 2018 nationwide industrial action to press home the Union’s demands from Government and directed all Chapters to hold Congress on Tuesday, 14th June, 2022 to further sensitize members on the festering issues. The industrial action is for a period of 4 weeks starting from 10th June, 2022.

It added that “due to the current situation the chapter finds itself, the congress cannot hold so as not to breach the security situation of the state. However, COEASU Shehu Shagari College of Education Sokoto chapter is presenting the following demands to the state government for implementation:
1) 20% remaining CONPCASS, 2) migration Policy, 3) Stoppage of Educational Levy, 4) non implementation of annual increment for 4 years, 5) nonpayment of promotion arrears, 6) nonpayment of gratuities to retired staff as at when due, 7) issue of checkup dues i.e 2% on gross not 2.5% on basic, 8) issues of facilities to the college since 2007 to date, 9) 2016 leave grant, 10) separation and indication of union deductions to respective subscribers, 11) excess workload.”

In a telephone interview with the Chairperson of the union, Ibrahim Adamu Musa, he confirm that the statement was from the union and further stated that the union had show solidarity with their national body.

Musa added that he was confident they would have positive response from Sokoto State Government.