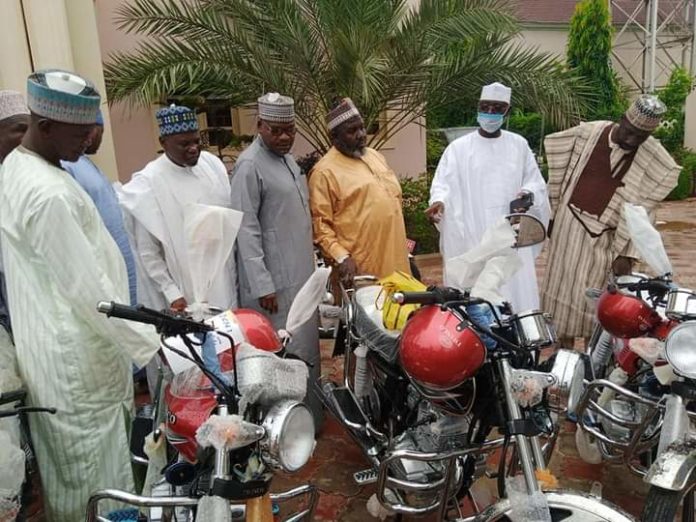 The Chairman of the Senate Committee on Defense as well as the Deputy Chairman, Senate Committee on Anti-Corruption, Senator Aliyu Magatakarda Wamakko, has fulfilled his recent pledge of donating one hundred and five (105) motorcycles to the members of the Vigilante Group of Nigeria (VGN) in Sokoto state.

Wamakko, a former Governor of Sokoto State, a week ago, made the pledge when he paid condolence/sympathy visits to Tangaza Local Government, over the killing of a Divisional Police Officer and another Police Inspector there, as well as scores of cases of kidnapping.

This was disclosed in a statement released by the Special Assistant, Media and Publicity to Senator Wamakko, Bashir Rabe Mani on Saturday October 3.

Also, Wamakko, who represents Sokoto North Senatorial District, on Thursday, October 1st, 2020, delivered the motorcycles to the Vigilantes in the Zone. 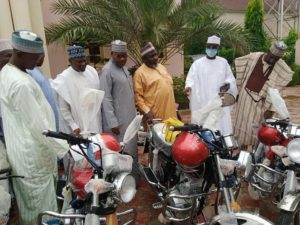 The VGN members in the eight Local Governments that make up the Sokoto East Senatorial District were also given their motorcycles as promised by Wamakko on Friday October 2.

The VGN members in the Sokoto South Senatorial District will get their motorcycles in the next few days.

Speaking at the ceremony held at his Sahabi Dange Road, Gawon Nama, Sokoto residence, Wamakko said that, rhe gesture was borne out of his sincere concern about the disturbing security situation in the state.

Represented by the State APC Chairman,Alhaji Isa Sadiq Achida,Wamakko stated that, he was not only a Senator, representing his zone, but a Father to the entire citizens of the state. 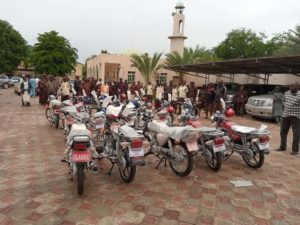 The Lawmaker added: “I have been sleepless nights about the obnoxious security situation in the state and I am always pondering on how to provide plausible solutions to the problem.

“This is also my own widow’s to complement the efforts of the various security agencies, to combat the myriad of security challenges in the state and Nigeria, in general.”

He further said that, the beneficiaries were chosen based on merit, as well as devoid of any political party affiliations.

Wamakko warned the beneficiaries against selling the motorcycles, adding ” they should be used wisely, operate according to your ethics and in acive collaboration with security agencies.”

Wamakko also admonished them to strive to gather credible intelligence reports and submit same to the security agencies, with a view to nip crimes in the bud.”

Oroji extolled the colossal contributions of Wamakko to the even socioeconomic development of the state for the past five decades.

Also speaking, the Zonal Vice Chairman of APC, Sokoto East Senatorial District, Alhaji Abu Baki Illela noted that, the motorcycles will bolster the provision of security of lives and properties of the law abiding residents of the state.

Baki also lauded Senator Wamakko for being consistently committed to the security, comfort and welfare of the entire people of the state.

“He has remained committed to ensuring the wellbeing of the residents of the state.

“Other privileged persons should emulate him,” he urged.

The State VGN Chairman, Alhaji Ibrahim Maikwalli, commended Senator Wamakko for the gesture and assured that, the motorcycles would be put to proper use.

According to Maikwalli,” We are really elated with this noble gesture which will greatly facilitate our routine operations.”

The event was witnessed by State and Local Governments APC executives, NFF Secretary General, Dr Muhammad Sanusi and other party Chieftains from across the state, among other dignitaries.

Edo Jailbreak: Escaped Inmate Kills Neighbour who had Testified Against Him in Court

One of the 1,993 inmates who escaped during the jailbreaks in Oko and Benin prisons in Edo state has been arrested for murder. It will...
Read more
SECURITY AND CRIME

The Adamawa state Commissioner of police, Olugbenga Adeyanju, said 35 tractors had been recovered, while 184 suspects had been apprehended over the looting of...
Read more
SECURITY AND CRIME

Rivers State Governor, Nyesom Ezenwo Wike, has announced N20 Million compensation to the families of each of the soldiers and policemen killed by members...
Read more

There have been growing concerns in Sokoto about how COVID-19 palliatives are being distributed, and authorities have cleared the air on the issue. According to...
Read more
Load more