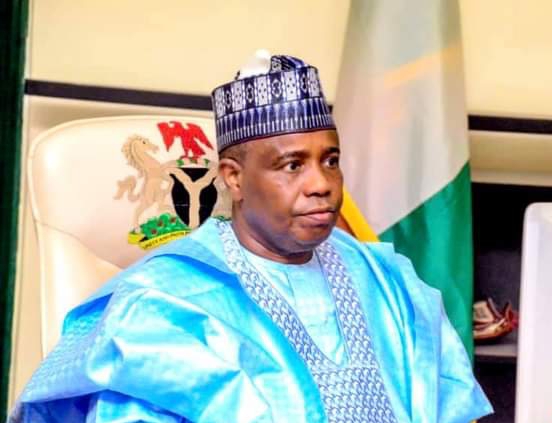 Sokoto state government has said it spends the sum of over N8 billion annually on school feeding programmes, students examination fees and other human development issues for more than seven years.

Governor Aminu Waziri Tambuwal of Sokoto state disclosed this on Saturday on the occasion of commemorating the 62nd anniversary of Nigeria’s independence held in the state capital.

Apart from the funds spent on feeding students in many schools across the state, the state government, explained Gov. Tambuwal, has over the years, consistently paid students’ examination fees for the National Examination Council (NECO), West African Examination Council (WAEC), National Board for Technical Education (NBTE) and sundry fees.

Conversely, Governor Tambuwal has ordered the Sokoto State University branch of the Academic Staff Union of Universities (ASUU) to resume classes or forfeit their salary fore with.

According to the Governor, in addition to the humongous expenditures on examination fees and student feedings aimed at significant human developments, the administration, has been paying scholarships, salaries, and pension benefits to beneficiaries as when due.

On the issue of the state-sponsored students hitherto studying in Ukraine before the war in the country broke out, the governor said he has discussed with the management of the state scholarship board and tasked them to look around for universities in Turkey, Egypt or India; or even in Nigeria, where the displaced students will continue with their education.

“We cannot allow you to stay out of school because that will affects your future negatively,” he added.

On the prolonged strike embarked upon by the Sokoto State University branch of the ASUU, the governor challenged the branch of the union on the propriety of its members drawing their salary while being in cahoots with their federal counterparts.

He asked them to reconsider their position and go back to work, maintaining that the issues raised by ASUU branches in federal universities are not the same as what obtains in the state university.

The governor charged that if they have other issues they should come forward with them, otherwise he will not pay them their salary until they go back to the classroom.

He admonished the branch to resume work if indeed they have the interest of the state and its students at heart, stressing that last month he stopped the payment of their salary because he has been magnanimous enough by paying them more than five-month salary without work.

On his administration’s achievements so far, the Governor said he would like to be remembered not for the many ongoing and accomplished constructions, flyovers, and building of schools, but his contributions to human capital development.

He said that is why he is building a girl-child, Science, Technology, Engineering and Mathematics (STEM) focused academy in Kasarawa and the Sokoto state university teaching hospital; saying that he projects that the STEM academy would produce graduates that would be enrolled on the state university of medical sciences in the future; “so that the girl-child can compete favourably with any girl in the world in terms of education and preparation to face the challenges of life.”

He said the administration has equally been working conscientiously on stemming the tide of the preponderance of high numbers of out-of-school children.

Hitherto, the state had over 800,000 out-of-school children, but now the number has dropped to just about 285,000. “So, the efforts are yielding positive results,” notes the Governor.

In his remarks, the commissioner of information, who is also the overseer of the ministry of youths and sports development, Hon. Akibu Dalhatu thanked the governor for carrying the youths in the state along by initiating various empowerment programmes that benefited them.

He also commended the Governor for youth inclusiveness in various sectors of his administration.